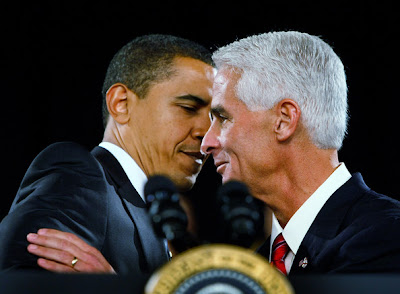 Here's an Associated Press article about Charlie Crist planning on increasing the State of Florida's budget by $2.7 billion...


spending by $2.7 billion during the next budget year.

It includes about $1 billion in additional federal money for Medicaid
that Congress has not yet approved, but Crist said he's confident it
will pass. (is that what Obama is whispering in his ear?)

The governor over the past week has been traveling the state to announce
key parts of the plan. They include a $535 million increase for public
schools, $100 million more for universities and an additional $67
million for state and community colleges.

Legislative leaders, though, say they are facing another tight budget
year and have been skeptical of Crist's proposals.

Copyright 2010 The Associated Press. All rights reserved. This material
may not be published, broadcast, rewritten or redistributed.
Again Crist is showing his true colors, which is far from a fiscally responsible Republican... This is exactly why we need to send a strong message in the upcoming primaries and choose MARCO RUBIO to represent our conservative values from Florida's fifth congressional district...
If you haven't taken the time, I urge you to visit Marco's website and donate to his campaign...
http://www.marcorubio.com/
Believe me when I tell you, I'm as financially strapped as the rest of you, but it's better to pay a little now than a bunch later... I've set up a small automatic payment each month which eases the impact on my budget...

Posted by The Born Again American at 9:07 AM