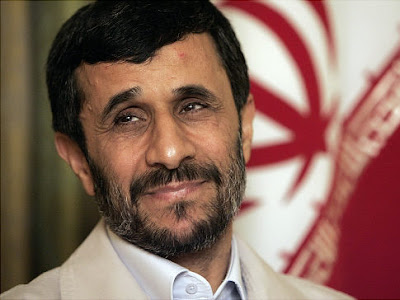 According to an AP report President Mahmoud Ahmadinejad (President Tom) has commissioned a team to study the damages caused from the 1941 Allied invasion of Iran.

President Tom said "A team has been assigned to calculate the damages (inflicted on Iran) in the Second World War. This will be an invoice they (Allied powers) must pay to the Iranian nation." His remarks were broadcast live on state television on Saturday.

The invasion by British and Soviet troops on August 26, 1941 was codenamed "Operation Countenance" to secure Iranian oil fields for use fighting the Axis forces.

President Tom was also quoted saying, "You inflicted lots of damages to the Iranian nation, put your weight on the shoulders (of the Iranian people) and became victors in the World War II. You didn't even share the war profits with Iran." President Tom went on to say, "If I say today that we will take full compensation... know that we will stand to the end and will take it."

In more babble from President Tom he went on to say Iran may demand compensation for WW I as well.
Well President Tom, I have just the answer for you! It is "The Patriotic Micro Chip" To check out my answer please read my post dated 1/3/10!
Lock & Load!!!
Sons & Daughters of Liberty Unite!!!
Posted by The Born Again American at 11:15 AM