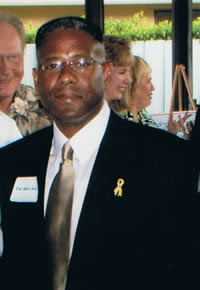 Friends,attached is my response to Senate Majority Leader Harry Reid's comments, which I consider incredibly vile. Feel free to disseminate and share with your email lists and post as you desire.
Allen West, candidate for US Congress
www.allenwestforcongress.com/
"The revelation of Senator Harry Reid's comments referencing "negro talk" is just indicative of the true sentiment elitist liberals, and indeed the Democratic party, have toward black Americans. The history of the Democrat party is one of slavery, secession, segregation, and now socialism. It is this new aged socialism born from the Johnson Great Society programs that have castigated blacks as victims needing government dependency. One need only to look upon the city of Detroit to ascertain what liberal social welfare policies have produced for the inner city.....the new plantation for black Americans.

The Ku Klux Klan was birthed by the Democrats as a terrorist wing to intimidate blacks, and whites, who sought to promote economic and education independence and social justice for blacks. What was once overt has just morphed and become covert, yet still exists..

One can only imagine the insanity and media outrage if Reid's quote had come from a member of the Republican party. I look forward to hearing from Jesse Jackson and Al Sharpton on Reid's comments........or has liberal hush money paid for the silence of these proprietors of poverty and victimization theory.. Actually, if President Obama had any courage he would demand Reid step down as Senate Majority Leader, and discontinue any support for his Senate reelection.......notice I said "if". I am quite sure the Soros money which elevated Obama to the position of President has bought his servitude.

Why am I running for US Congress as a Republican, simple, I would rather stand proudly and be called "Uncle Tom and Sellout" than lose my self-esteem and be considered an inferior by liberals. I understand the legacy of the GOP and the black community....not that revisionist history espoused by liberal educators. I am not, shall never be, and will not raise my daughters to be a part of the liberal 21st century plantation. I am not just some articulate, clean, good speaking negro. I am an American warrior, Congressional candidate, and shall never submit to the collective progressive ideal of inferiority.

Senator Harry Reid's comments are disgusting, despicable, and unacceptable. They are representative of how intellectual elite liberals do indeed speak of black Americans in their closed private spaces. Next week I have been invited to NYC to address the Hudson Institute, a conservative organization, conference on "Reclaiming American Liberty". That invite came to me because I took advantage of the opportunities this great Republic offered. I followed the guidance of my parents and set my standards above all others around me. I speak well and have impeccable communicative skills because my Father and Mother prioritized that quality.

I shiver to think what my future could have been if I listened to the insidious rhetoric of charlatans such as Harry Reid, and the ambassadors of affirmative action who reside in the Congressional Black Caucus.

Sure, the "stuck on stupid" blacks are going to address me in derogatory names, but I possess something which they lack; Honor, Integrity, and Character. To them I say, continue to be slaves to the liberals for your vote.......and in a year you will be calling me Congressman West.

Posted by The Born Again American at 11:00 AM