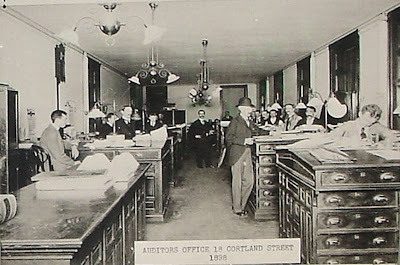 This picture was taken before the Federal Reserve was established, but their auditing practices are just as archaic... Well actually, they don't exist and that is what this post is all about... I receieved this email earlier and though it lists senators to call in Florida, it would apply elsewhere as well...
January 21, 2010
Dear C4L Member,
Our country’s economic future is in Ben Bernanke’s hands on a daily basis.Now his job security is in ours.I need you to immediately call your senators with a simple message: “No vote on Bernanke until we get a vote on Audit the Fed.”
Senator George LeMieux: 202-224-3041
Senator Bill Nelson: 202-224-5274
Here’s what’s going on and why you need to act immediately. It’s a little complex, so bear with me.
Senator Jim DeMint (R-SC) has led the charge to place a “hold” on Bernanke’s nomination to a second term as Fed chairman until the Senate votes on Audit the Fed. This means to get a vote on Bernanke, Harry Reid has to have a vote on “cloture” (just like in the health care battle), and that requires a super-majority of 60 votes.Insiders now tell me that Harry Reid is threatening to ram through a cloture vote as early as next week.Senator DeMint is joined by David Vitter, Jim Bunning, and Bernie Sanders in his efforts, but these senators cannot succeed alone. But right now, Republicans should stop caving in to Harry Reid’s muscle on behalf of Ben Bernanke and the out of control Federal Reserve, and Democrats are cowering in fear of the popular revolt against out of control spending and the economic wreck it has helped create.A strong message from Campaign for Liberty activists like you could start a stampede in the Senate that will make Harry Reid back off of Bernanke and give us a vote on Audit the Fed.After all, Harry Reid is already the most vulnerable Democrat up for reelection next year, according to the polls.
Call your senators at the following numbers:Senator George LeMieux: 202-224-3041Senator Bill Nelson: 202-224-5274Make sure you let them know that:
1.) If they are not cosponsoring Audit the Fed, you expect them to sign on in support of finding out what the Fed has done with trillions of our dollars. Tell them you will make sure their constituents know of their action or inaction on this issue.
2.) They must vote “no” on cloture until after there is a vote on Audit the Fed. No vote should be taken on Ben Bernanke’s confirmation, or the nomination of anyone else for Fed Chairman, until Audit the Fed has received a public, up or down vote. The real issue here is not the Fed chairman himself. It is the need for complete transparency.Ben Bernanke’s term as Fed chairman expires on January 31, so Harry Reid is under pressure from Barack Obama to act quickly. Which means we must act even faster.The Senate has enough on its plate with the fight over health care, so they can ill afford to face yet another tough fight over the leadership’s agenda.Time to turn up the pressure.Take action today to push for a vote on Audit the Fed, S. 604!
P.S. Senator DeMint and his colleagues are counting on your support as they fight for Audit the Fed. Call your senators today and urge them to delay any action on Ben Bernanke's confirmation until Audit the Fed receives a public, up or down vote!
Lets hand Obama another defeat, he needs to get used to them...
Posted by The Born Again American at 12:02 PM