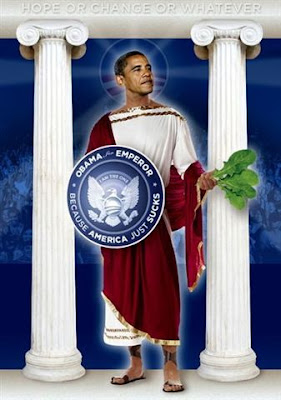 Here's a few quotes from our Emperor-N-Chief...

2. "I love the name of dipstick, more than I fear not being re-elected"

3. "Politicians lie many times before their actual election"

4. "It is better to create a lie, lying is the essence of life"

7."Men in general are stupid to believe that which I wish to be true"

8. "If you must break the law, do it to seize power: in all other cases just bend the hell out of it"

9. "I would rather be first in the small village of Chicago than vice-president under Hillary"

11. "It is not the Democrats that I fear, but those damn Tea Party goers"

12. "Which exit is preferable to every other? Impeachment"

13. In blame, events of importance are the result of George Bush"

14. "It is easier to find men who will volunteer to lie, than to find those that are willing to endure my bull s**t"

15. "I have lived long enough to satisfy both George Soros and my ego"

My only question for the Emperor would be simple...

If you weren't supposed to listen to "We the People", why did God make your ears so big???

Posted by The Born Again American at 1:16 PM