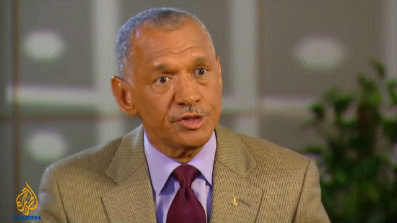 SOMEWHERE AS WE SPEAK, MISS PIGGY HAS A TEAR RUNNING DOWN HER CHEEK...


I just about spilled my coffee all over me this morning while watching Fox and Friends when this aired... Here is a picture of Charles Bolden the head of NASA, who during an interview with Al Jazeer (why on earth was this taking place to begin with?) said that his "foremost" mission as head of America's space exploration agency is to improve relations with the Muslim world... Here's the entire article from FOXNews.com...

NASA Administrator Charles Bolden said in a recent interview that his "foremost" mission as the head of America's space exploration agency is to improve relations with the Muslim world.
Though international diplomacy would seem well outside NASA's orbit, Bolden said in an interview with Al Jazeera that strengthening those ties was among the top tasks President Obama assigned him. He said better interaction with the Muslim world would ultimately advance space travel.
"When I became the NASA administrator -- or before I became the NASA administrator -- he charged me with three things. One was he wanted me to help re-inspire children to want to get into science and math, he wanted me to expand our international relationships, and third, and perhaps foremost, he wanted me to find a way to reach out to the Muslim world and engage much more with dominantly Muslim nations to help them feel good about their historic contribution to science ... and math and engineering," Bolden said in the interview.
The NASA administrator was in the Middle East last month marking the one-year anniversary since Obama delivered an address to Muslim nations in Cairo. Bolden spoke in June at the American University in Cairo -- in his interview with Al Jazeera, he described space travel as an international collaboration of which Muslim nations must be a part.
"It is a matter of trying to reach out and get the best of all worlds, if you will, and there is much to be gained by drawing in the contributions that are possible from the Muslim (nations)," he said. He held up the International Space Station as a model, praising the contributions there from the Russians and the Chinese.
However, Bolden denied the suggestion that he was on a diplomatic mission -- in a distinctly non-diplomatic role.
"Not at all. It's not a diplomatic anything," he said.
He said the United States is not going to travel beyond low-Earth orbit on its own and that no country is going to make it to Mars without international help.
Bolden has faced criticism this year for overseeing the cancellation of the agency's Constellation program, which was building new rockets and spaceships capable of returning astronauts to the moon. Stressing the importance of international cooperation in future missions, Bolden told Al Jazeera that the moon, Mars and asteroids are still planned destinations for NASA.

Is there anyone out there that still doesn't believe our Muslim-N-Chief isn't trying to destroy the America we know and love...
Posted by The Born Again American at 10:49 AM