THIS SUMS UP THE PROBLEM IN VERY FEW WORDS (P) 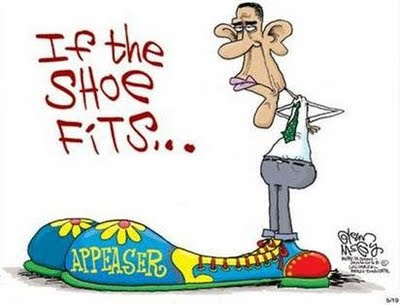 “The danger to America is not Barack Obama but a citizenry capable of entrusting a man like him with the presidency. It will be easier to limit and undo the follies of an Obama presidency than to restore the necessary common sense and good judgment to a depraved electorate willing to have such a man for their president. The problem is much deeper and far more serious than Mr. Obama, who is a mere symptom of what ails us. Blaming the prince of the fools should not blind anyone to the vast confederacy of fools that made him their prince. The republic can survive a Barack Obama, who is, after all, merely a fool. It is less likely to survive a multitude of fools such as those who made him their president.”

-- Author Unknown
.
WAKE UP AMERICA!!!
.
The cartoon was borrowed from Ron @ Obama Cartoons check it out, some really great stuff...
.
I have to recognise my dear friend (and arch enemy Scrabble opponent) Linda for sending me this email... Tammie & I have been locked in Scrabble Combat with Linda and her husband Howard for years... Anyone who thinks Scrabble is for wimps, should attend one of our games... It can get ugly, but we love you guys...
Posted by The Born Again American at 8:51 AM