IS NOTHING SACRED? (P) 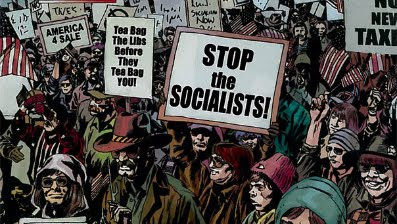 This article came directly off FOXNEWS.COM it seems that the left has even infiltrated comic books...

I will plead the 5th on this, as I haven't read a handful of comics in my entire life, but come on! From the looks of this, I guess this isn't your basic "Archie" or "Bugs Bunny" that I think of when the words "comic book" are used... Who exactly reads this stuff? (didn't use trash as I don't wish to offend) Is this where Robert Gibbs and Janeane Gorafalo get all their misinformation regarding the "Tea Party" movement?


A "tea bag" reference in a recent Captain America comic book that has angered the Tea Party
movement will be removed by Marvel Comics in future editions, the story's writer told
FoxNews.com.

In issue No. 602 of Captain America, "Two Americas, Part One," the title hero and The Falcon, a black superhero from New York City, stumble upon a protest rally in Boise, Idaho. They see scores of protesters carrying signs that say "Stop the Socialists!" and "Tea Bag The Libs Before They Tea Bag YOU!"

Captain America says the protest appears to be an "anti-tax thing," and The Falcon jokes that he likely would not be welcomed into the crowd of "angry white folks."

Ed Brubaker, who wrote the story, told FoxNews.com he did not write the "Tea Bag The Libs Before They Tea Bag YOU!" sign shown in the edition, insisting that the words were added by someone in "lettering or production" just before being shipped to the printer. It will be changed in subsequent editions, he said.

"I don't know who did it, probably someone who thought it was funny," Brubaker wrote in an e-mail. "I didn't think so, personally. That's the sign being changed to something more generic for the trade reprint, because I and my editor were both shocked to see it."

But the change may come too late to placate a chorus of critics who noticed the apparent jab at the Tea Party movement and who accused Marvel of making supervillains out of patriotic Americans.

Michael Johns, a board member of the Nationwide Tea Party Coalition, said he felt the "juvenile" dig will ultimately do more damage to Marvel's brand than to the Tea Party movement. He also disputed the insinuation that the growing movement lacks diversity.

"The Tea Party movement has been very reflective of broad concerns of all Americans," Johns said. "Membership is across ethnic, religious and even political lines."

Johns accused Brubaker of "blame-shifting" and questioned why an apology or retraction hadn't been issued as soon as the writer or Marvel executives noticed the politically charged signs.

Brubaker, meanwhile, has made no secret of his political leanings.

He said he wrote the script "four or five" months ago, which was shortly before he posted critical messages on his Twitter account regarding former vice presidential candidate Sarah Palin, Minnesota Rep. Michele Bachmann and former President George W. Bush.

"Memo to Bachman and the rest of the tea crowd -- We had a revolution already, it's called an election," Brubaker tweeted on Nov. 5.

Nine days later, he wrote: "What did we learn this week? That Sarah Palin is a lying idiot. Hey, welcome to 2008 again."

But Brubaker was adamant that he did not intend to imply that the group of protesters in the comic book were Tea Partiers.

"I was simply using them to show the mood in the country in various places outside Captain America and the Falcon's usual home, New York City," he wrote. "It's very similar to other things we've done in the comic, showing leftwing protest crowds back during the election season in 2008."

A spokeswoman for Marvel Comics did not respond to repeated requests for comment.

Herb London, president of the Hudson Institute, a think tank based in Washington, said the protest scene in the comic book is merely the latest attempt in a "systematic effort" to chastise the grassroots Tea Party movement.

"I was perplexed by this," London said. "It seems to me there was a clear effort on someone's part to undermine the Tea Party movement."

London said the comic strip insinuates the protesters are "loonies," and he questioned The Falcon's reference to race.
"It involves sensitivities," London said. "There's no reason for something like that to be included."
Posted by The Born Again American at 12:08 PM