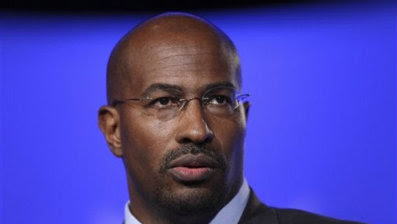 Just when you thought we'd seen the last of this Communist jerk...
According to FOXNews.com, it seems as if Van Jones is making a come back... (as if he was ever really gone) Am I the only one who thinks that this guy should be railroaded out of Washington and anything that could possibly shape the future of The United States of America? This man is a danger to society... There are plenty of black conservatives, so I know that it is not merely his ethnic background that makes him so anti American... He along with our president have an axe to grind with the American people as they try to force their agenda on the rest of us... Obama and the progressives agenda pale in comparison to what Van Jones wants for our country...

Wake up America, this man is EVIL...
Van Jones Returns to Spotlight With Posts at Princeton, Think Tank

After a nearly six-month hiatus out of the public eye following his resignation from the White House last September, Van Jones has been appointed as a fellow with Princeton University and with the Center for American Progress, a liberal think tank.
Van Jones is back.
After a nearly six-month hiatus out of the public eye following his resignation from the White House last September, Jones has been appointed to posts at Princeton University and with the Center for American Progress, a liberal think tank in Washington, D.C.
The controversial former green jobs adviser is also receiving an award from the NAACP Friday and plans to attend a forum on jobs creation with Sen. Kirsten Gillibrand, D-N.Y., next month in New York City.
The sudden flurry of activity appears to mark the end of Jones' retreat from public life after a short stint as adviser to the White House Council on Environmental Quality. He resigned under pressure in early September due to mounting criticism over controversial remarks and positions, including his calling Republicans "assholes," making racially charged statements and signing a petition in 2004 supporting the "9/11 truther" movement, which believes the Bush administration may have been involved in the Sept. 11, 2001, terror attacks. The petition was the breaking point, and his resignation came shortly afterward.
But Jones, in an interview with The Washington Post, defended himself against the withering attacks he endured last year and distanced himself from the "truthers." Jones said he believes Al Qaeda and Usama bin Laden, and "nobody else," were behind the Sept. 11 attacks. He said his name showed up on the petition because he expressed verbal support for a group that came up to him six years ago and said they represented "911 families" without realizing what they represented.
"Unfortunately, I didn't know what their agenda was," Jones said. "So then they went and added my name, without my knowledge, to this awful, abhorrent language they had on their Web site."
911Truth.org has disputed this explanation. 911Truth.org spokesman Mike Berger said last fall that Jones "did agree with that statement and he did sign on to it."
But Jones told The Washington Post that he made a "big mistake" in not doing his "homework" on the organization before offering "support of any kind."
He said he doesn't have "any bitterness or anger" about his past.
Princeton University announced Wednesday that Jones has been appointed as a visiting fellow at the Center for African American Studies and at the Woodrow Wilson School of Public and International Affairs' program in Science, Technology and Environmental Policy. During the one-year appointment, Jones will teach a spring course on "environmental politics."
In a statement put out by Princeton University, Jones said he looks forward to using his term at the Ivy League university to explore "green solutions" to help America's economy.
"We're looking forward to a year of intense engagement with Van," Eddie Glaude, chairman of the Center for African American Studies, said in a statement.
The Center for American Progress announced Wednesday that Jones would be a senior fellow and leader with its Green Opportunity Initiative.
CEO John Podesta called Jones a "pioneer" in the movement to create a clean energy economy.
Before Jones ran into the wall of controversy last year, he was considered somewhat of a wunderkind in environmental circles.
In addition to writing "The Green Collar Economy," he has co-founded and worked with several groups dedicated to helping low-income and minority communities -- often through green jobs and better environmental policy. He got his start as a San Francisco-area activist, and in 2009 was named as one of Time magazine's 100 most influential people.
But some of his past comments had given critics pause about his fitness for a White House-level office, pointing to his radical activities a decade ago as well as more recent controversial stances.
Jones was a self-described "communist" during the 1990s and previously worked with a group dedicated to Marxist and Leninist philosophies. His comments, even in recent years, were often racially charged. He's blamed "white polluters and white environmentalists" for "steering poison" to minority communities. In 2005, he drew a distinction between white and black youths involved in shooting incidents by referencing the 1999 Columbine High School massacre.
"You've never seen a Columbine done by a black child. Never," Jones said. "They always say, 'We can't believe it happened here. We can't believe it's these suburban white kids.' It's only them!" he said. "Now, a black kid might shoot another black kid. He's not going to shoot up the whole school."
Such statements did not draw widespread attention until after a February video surfaced showing him calling Republicans "assholes" during an address in Berkeley, Calif. Jones apologized, but faced down his past again when it was discovered that he signed the 2004 "truther" petition.
Now that he's returning to prominent positions, several high-profile organizations are backing him up.
Benjamin Todd Jealous, president and CEO of the NAACP, called Jones an "American treasure" in an online opinion piece. The NAACP plans to honor Jones with an Image Award Friday.
Posted by The Born Again American at 3:52 PM