EVEN THE MIDNIGHT COWBOY GETS IT (P) 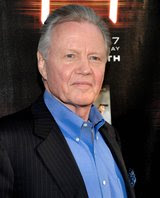 An open letter from actor Jon Voight to President Obama:

You will be the first American president that lied to the Jewish people, and the American people as well, when you said that you would defend Israel, the only Democratic state in the Middle East, against all their enemies. You have done just the opposite. You have propagandized Israel, until they look like they are everyone's enemy - and it has resonated throughout the world. You are putting Israel in harm's way, and you have promoted anti-Semitism throughout the world.

You have brought this to a people who have given the world the Ten Commandments and most laws we live by today. The Jewish people have given the world our greatest scientist and philosophers, and the cures for many diseases, and now you play a very dangerous game so you can look like a true martyr to what you see and say are the underdogs. But the underdogs you defend are murderers and criminals and want Israel eradicated.

You have brought to Arizona a civil war, once again defending the criminals and illegals, creating a meltdown for good, loyal, law-abiding citizens. Your destruction of this country may never be remedied, and we may never recover. I pray to God you stop, and I hope the people in this great country realize your agenda is not for the betterment of mankind, but for the betterment of your politics.

With heartfelt and deep concern for America and Israel,

Please don't take the title of this post in any way shape or form as being derogatory, as Jon Voight is one of the few conservatives in Hollywood and has my utmost respect as an actor and more importantly as an AMERICAN...
Posted by The Born Again American at 1:07 PM