WHY CHARLIE CRIST IS AN IDIOT (P) 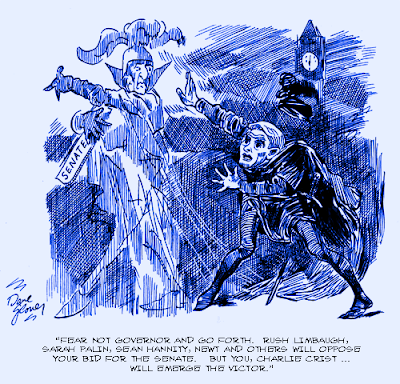 Please read the Associated Press release about a new bill the Florida House has just passed... Make sure you read the last sentence... This coming from the same Charlie Crist who on national television stated that he is a Republican in the fashion of John McCain and Lindsey Graham... (need I say more)

TALLAHASSEE, Fla. (AP) - Hailed as a national model by conservative academics and politicians, legislation that would make it easier to fire Florida teachers and link their pay to student test scores is going to Gov. Charlie Crist after a marathon House debate that began Thursday night.

Business interests as well as most Republicans backed the bill that was opposed by teachers and their unions, local school officials and Democrats.

It passed 64-55 early Friday in the GOP-controlled House on a largely party-line vote at 2:26 a.m. The debate dragged on for more than eight hours although opponents acknowledged at the start they didn't have the votes to stop the bill from passing.

Crist once praised the measure but now says he's unsure if he'll sign it or veto it.

Marco Rubio is our only hope...
Posted by The Born Again American at 10:49 AM